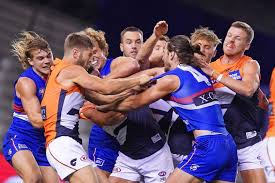 When did the AFL and Channel 7 begin televising a game between out of control juvenile delinquents and calling it an AFL game played by elite professional players?

It happened on the evening of the 19th June 2020 and it was a disgrace to all concerned.

Last night (19th June 2020) I watched with shame, an AFL football game played by ill-disciplined juvenile delinquents masquerading in adult bodies. Amazingly this game was televised by an organisation allegedly claiming to support decent and lawful behaviour in its current affairs programs, and at a time when there is worldwide support against violence and that “black lives matter”. All lives matter, regardless of race, colour, creed, religion, gender, and no matter which football team you may follow or play for.

Shame on you Channel 7 for allowing your commentators to glorify, by using some incredulous sense of logic “remember it is a contact sport”, to justify the intentional outrageous violent behaviour of the players and coaches in this distressing affair.

At a time when decency and a fair go is under huge stress as a critical core value, and where in Victoria, intimidation, bullying, out of control egos and greed has infiltrated our political leaders, yesterdays display on the football field only proved to demonstrate that intentional unconscionable bad and lawless conduct was an accepted way of doing things in the AFL, and in Victoria.

The issues so well promoted into our lives by the courageous acts of people like Adam Goodes and many others, was lost on the AFL commentators that were entrusted with calling out inappropriate behaviour on the field yesterday. Instead they only proved that they were incapable of understanding the critical difference of cause and symptom.

The cause of much, if not all, of the actions I saw on the football field last night were a direct result of the erroneous belief that the mistakes of the past can and must be continued into the future. If only the words: “sorry, I won’t do it again” were outlawed as a reasonable defence indicating remorse.

Prior to the bounce of the ball, GWS had chosen to take a regrettable action about a past occasion, when their captain was replaced at the coin toss by a player who had physically suffered, at a previous encounter between the clubs. This was not a tolerable strategic business plan, rather it was a premeditated action designed to instigate a violent response. It should never had been allowed to occur and all those who predetermined that course of action are incapable of professional leadership behaviour.

The umpires were incapable of doing anything about it and the police who were likely not in attendance, now have an abundance of video evidence on which to lay charges, but will likely also turn a very blind eye to the entire affair.

Most remarkable of all was that one of the most highly respected and well-balanced sports commentators who was in Adelaide rather than at the ground, was also taken into the excitement of these intolerable behaviours.

Bruce McAvaney was not in the commentary box at the ground or perhaps he would have counselled off-air, his less mature colleagues against “gloryifing” outrageous on-field behaviour. How easy it is to be dragged into accepting violence in all its manifestations. In future Bruce, call it out, you are better than that.

The many thousands at home who enjoyed watching this demonstration of inappropriate and outrageous testosterone induced behaviour, and who would agree with the childlike belief of one of the commentators that; “this is a contact sport”, think again. Try explaining to your son or daughter that domestic violence is ok if you live with a person who feels emotionally confronted by your actions or past behaviours.

On the same day that it was reported that Channel 9 and Sam Newman had reportedly parted company as a result of comments Newman made about the character of the deceased in the “Black lives Matter” protests in the USA. It is unfathomable that the behaviour witnessed at the AFL game between the Western Bulldogs and Greater Western Sydney was never called out as offensive and wrong. Instead it was validated as completely understandable and worse still suitable and fit for purpose.  One commentator called the observed actions “wonderful”.

Both teams should forfeit their right to play in the next round and the Western Bulldogs should have their winning points withdrawn. Someone must call out this type of violence-based behaviour or else the scourge of violence in our home, offices and sports will prosper.

If you enjoyed the violent spectator sport you watched last night, then take a moment to think about the real probability that one day, you may no longer be a spectator. Shame on you AFL, Channel 7, its commentators and all who relished the spectacle.

There is no point talking about stamping out violence in all its manifestation and promoting its survival at the same time.